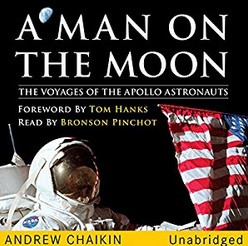 If you’re the least bit interested in the space program – especially NASA’s early years – then you’ll love “A Man in the Moon: The Voyages of the Apollo Astronauts” by Andrew Chaikin. The audio book comes in at exactly 23 hours, and covers the Apollo program from the Apollo 1 disaster all the way through the final Apollo 17 mission

Part biography, part debriefing, Mr. Chaikin skillfully weaves interesting character portraits and anecdotes of the astronauts with the missions themselves. I loved getting to know more about each astronaut and his reasons for joining the space program. Some wanted a challenge, something even more exciting than being a test pilot, which most of the early astronauts were. Some like Jim Lovell had always dreamed of exploring space and landing on the Moon, and that makes his Apollo 13 mission all the more tragic. Twice he got to fly around the Moon – first on 8 and then on 13 – but he never got to set foot on it. And there was at least one who just thought it sounded like a decent job and he was going to be the best astronaut he could be, though I forget which one that was.

While all of it is worth listening to, the first half is by far the most exciting. Book-ended by two disasters – Apollo 1 and 13 – the meat of the first half is a triumph of firsts. The first Lunar orbit, Apollo 8, was a race against the Soviets. Apollo 9 was the first time a Saturn V rocket carried both the Command Module and the Lunar Module, and this was the first time the docking procedure would be performed. And the main event, the first landing with Apollo 11, was a near disaster when Neil Armstrong missed his landing zone and had to improvise to avoid boulders and craters with his delicate lander.

The latter half of the book has more of a focus on the scientific achievements of the Apollo program, and they are quite extensive, especially from a geological standpoint. Apollo 15’s discovery of the Genesis Rock is one such achievement that stands out in my mind, along with the many health and mechanical challenges faced on that mission, the first of the J-Missions (The longer stays on the Lunar surface). The book doesn’t delve into too much of the nitty-gritty details of the science, which may or may not be a turn-off for some. As someone who is more interested in the people, it was a relief for me. There’s a reason I don’t really enjoy techno-thrillers, except in rare cases.

The narrator, Bronson Pinchot, does an excellent job of bringing the story and people in it to life. I don’t know if Bronson himself is much into NASA’s history and space travel, but he could’ve fooled me with his performance. Some of the astronauts – from Buzz Aldrin’s awe-inspired description of the Moon as “Magnificent desolation” to Pete Conrad’s lighthearted first words as he followed in Neil and Buzz’s footsteps onto the surface – are delivered with quite the range of emotions. I’ve listened to him read David B. Coe’s “His Father’s Eyes” and he did a great job there, too, so it’s no surprise he’d deliver well here.

In all, I loved this book and can’t wait to read more about the space program. Between this and the Jim Baen Memorial Award book from Baen, I haven’t been this interested in space travel since Space Camp back in 5th grade, and that’s saying a lot!

I bought this with my own, hard-earned Audible Credits. If you’d like to purchase it or other books from Amazon, I’d appreciate if you used the affiliate link here or in the image above: “A Man on the Moon: The Voyages of the Apollo Astronauts.” It helps keep the site running, and it keeps me stocked in audio books for more reviews. It is appreciated!