Still adjusting to the new work schedule, but things are finally starting to shape up. I’m working about 50 hours a week on the day job, and am slowly working in time for about 40 hours of writing each week. Realistically it will probably be closer to 30-35, since it takes an hour or so for me to shift gears from working to writing. Maybe my brain just needs to relax for a bit or something, but that first hour is always so inefficient that I might as well not count it.

Anyway, along with this schedule adjustment comes a major change in my writing plans for the year. Well, a couple of changes, but chief amongst them is my decision to switch to a new novel, and it pains me to do so. The Wendigo novel is something I’ve been planning for years, off and on. It’s a universe and concept that’s very near and dear to me, and it’s something I want to get absolutely right.

I’ve written a short story about it. I then brainstormed/outlined how I could expand it into a novel. After that I wrote the rough draft of the novel, which was a very illuminating experience. Though I never went and edited it I learned a lot about pacing and story structure as well as what I was missing from my earlier outline. There were a lot of gaps in the world-building, from the magic to the history to even the geography. I knew where Points A, B, C, and D were, but what was between them? Pfft, who cares, right?

I’ve since outlined and re-outlined it, working in new characters and taking out old ones that just didn’t work anymore. I’ve most recently gone back to the drawing board on the magic system, and I did this just as I was sitting down to finish my outline and start writing the second rough draft of it. And then there was-

Starting to see the pattern here? I’m throwing up roadblocks, slowing and ruining what forward momentum I had. It’s fear of getting it wrong, of failing at something I’ve spent so much time on. 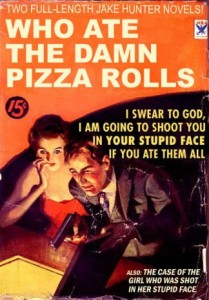 So, I’ve killed the story for the time being. Killed it, sliced it up, put it into food saver bags, and placed onto a prominent shelf on the freezer. It’s not stuffed away somewhere so I’ll forget about it. I very much want to write this story, this series. But, not today.

Who gave me this idea? Brandon Sanderson, Dan Wells, and Howard Tayler over at Writing Excuses. (I have yet to get to the seasons where Mary Robinette Kowal becomes a regular, but her discussion on puppetry and how it relates to storytelling is amazing. Go listen to it!)  My day work involves a lot of mindless data entry. That means plenty of time to listen to writing podcasts. In the last week and a half I’ve burned through the first three seasons (20+ hours) and have amassed 42 pages of detailed notes. A lot of the writing principles covered are things I’m aware of, but much of it’s been eye-opening.

In several of the episodes they discuss getting stuck on pet projects and ultimately getting dragged down by it. Their advice?

You guessed it. Shelve it and try something completely new, and not something else that’s been sitting for years and years and has lots of excess baggage.

No sooner did I make this decision on Tuesday morning (And it was a tough one, believe me) that new ideas started coming to me, and from all over the place! A new world, new characters, and new conflicts. I’m overflowing with ideas for a brand new book. In just an hour after the first ideas came to me I already had 8 pages of notes. Since Tuesday I’ve doubled that count, and as soon as I finish this post I’m diving headfirst back into the brainstorming process.

It’s such a liberating feeling, even if it is a little bit frightening and frustrating at the same time. I have this huge blank slate to start working with, and I have to realize that I’m now a month behind on any kind of novel writing schedule. I will either have to pick up the pace on this novel, or scale back my realistic expectations for the year. I’m going to hope for the former and prepare for the latter. It’s just how I operate. Always plan for 200%, then when you only get half accomplished you can still say you did it all.

With all that said, I need to be careful of two things on opposite ends of the spectrum:

There’s a fine balancing act to be had here. Start too soon and I’ll be writing in white space and make dumb plot decisions that won’t hold up inside a well-crafted setting with well-planned characters. Start too late and I’ll never get any writing done. To avoid this I’ll judge how progress is going over the next few days and determine a hard deadline for the ending of brainstorming and the beginning of outlining. The outlining process itself I want to take no more than a month, once more following Karen Wiesner’s “First Draft in 30 Days” format. This format really helped me with the Wendigo outline. With a fresh start I expect this will be even more invaluable.

To help me build characters, I will start up again with Michael A Stackpole’s “21 Days To a Novel“. I love this book. There’s so much to learn from it.

So, that’s the big update for the moment. Lots of work to do, with the focus shifting mostly to novel writing for the foreseeable future. I still want to write short stories, but I do not think I will be writing them at the pace I intended to. Same goes for reading. I wanted to read two books a week, but I don’t know that there will be time for that. On the plus side these craft podcasts can sort of count as nonfiction book reading, but what about my fiction reading? I need my epic fantasy!

I think my posts from here on may go more into the nuts and bolts of my writing process, from brainstorming to outlining to drafting to editing. I’m hoping to have the first and possibly edited draft of the book ready by sometime in April, so I will be a month behind my original plan for the year. Let’s shoot for that, and see where it takes us!