A sad end to a great era.

The makers of “Settlers of Catan” are closing their doors. It won’t meant the end of Catan, as another company is picking up the rights to it, but it is still an ending for Mayfair Games. 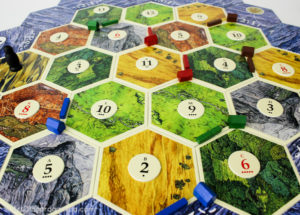 This hits close to home for me, as Settlers of Catan was one of the first non-traditional board games I’d gotten into. Before it, I didn’t play too many board games other than the usual suspects (Clue, Monopoly, Life, etc). I had one friend I played Axis & Allies with every now and then when we were over at his house, but after a point we shifted over to playing StarCraft or Rome: Total War together and that sort of fell by the wayside. I’m not sure why, because Axis & Allies is a lot of fun. Although, it does take awhile to set up. Much easier to just load up a video game, right?

Anyway, it’s sad to see, but it does serve as a reminder that I’ve got some great board games I need to break out with friends in the coming days and weeks. I think I’ll start reviewing some of them, as well. Things like Arkham Horror and a new acquisition I haven’t even unboxed yet: Descent – Journeys in the Dark. More than just reviews of them, it’ll be more like after action reports, because my friends and I get into some stupid crap that can be pretty funny.